We're hiring!
Work with us

On Monday the Kind office woke up early and packed their camping gear for a team trip to beautiful North Wales.

After a long drive and an on-route full english breakfast, we set up our tents at the awesome Snowdon Base Camp on the shore of Llyn Cwellyn, before gearing up and setting off to climb Snowdon in the glorious sunshine.

It was tough work, but we made it to the top in a little over 3 hours, grabbed some flapjack, took some photos of the amazing views and began our descent, followed by an RAF Chinook and two Apache Helicopters!

Tuesday, we started with a refreshing dip in the lake before driving over to Anglesey to meet the local Surfers Against Sewage rep and owner of Psyched Paddleboarding, Sian.

Sian guided us through a clean of Newborough Beach where, despite being one of the Wales’ 41 Blue Flag beaches, we found quite a bit of marine litter. Cotton bud sticks, a golf ball, 8 empty cans of Fosters, a wine bottle, a discarded pair of socks, fish hooks and plenty of discarded (but full) dog poo bags!

Surfers Against Sewage have been campaigning for cleaner beaches and oceans in the UK since 1990 and have recently launched the Plastic Free Coastlines campaign. It was eye-opening to say the least when we discovered some of the cold facts about marine litter:

And yesterday we read that the US scientists have calculated the total amount of plastic ever made at 8.3 billion tonnes.

A post shared by Psyched Paddleboarding (@psyched_paddleboarding) on Jul 18, 2017 at 2:38pm PDT

After the beach clean we donned some not-so-flattering wetsuits and went paddleboarding.

Some of us managed to stand up, most of us fell in, but it was an amazing experience in such a beautiful place and on such a clear and sunny day.

We paddled over to Ynys Llanddwyn, where we had tea and cake on the beach before paddling back over to Newborough Beach for an excellent BBQ. All plastic free of course!

Today, we’re tired, covered in bites and our legs ache more than you’d expect from people our age, but we’re now determined to avoid single use plastic forever. We’re looking for places where we can get milk, fruit and bread for the studio in reusable packaging and we’ll bore all our family and friends until they do the same! 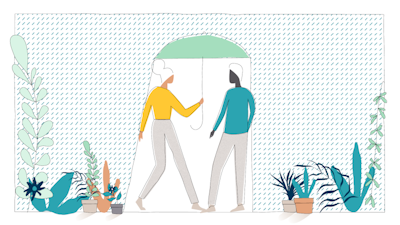